Ballyclare High School celebrated its centenary in the school year 2003/2004 when a full history by Dr Kevin Conway was published. The school had its origins in what historians sometimes call the “long nineteenth century”. It started with the 1798 Rebellion and ended with the eventual partition of Ireland. The school started in the 1890s as a private fee-paying establishment in Doagh, a town a couple of miles from Ballyclare in County Antrim.

In 1902 the school was taken over by a Miss Catherine Aiken and in 1904 she moved the school to Ballyclare. The population of Ballyclare a century ago was around three thousand, but it was on the increase. Due to the growth in numbers attending the school, there was a pressing need to move to a larger building. New premises were eventually built on the present site on the Rashee Road and this became the school’s home in 1930. The Headmaster was by then an Englishman, Arthur Fowweather who, when appointed in 1923, was believed to be the youngest Headmaster in the British Isles. The school’s name was changed and the current name of Ballyclare High School was adopted officially in 1935.

The school also adopted a crest designed by one of its pupils and a school song that was called “Play the Game”! Due to a lack of space, during Mr Fowweather’s tenure the dominant sport in the school was hockey and the school enjoyed significant success in winning a number of competitions, for example the Ulster Schools’ Hockey cup in 1935, an accolade enjoyed again at senior level in 2012.

By the mid 1930s the school had nearly one hundred and fifty pupils on its roll and it had out-grown its building once again. Costing the princely sum of £8,000, a new extension was opened in October 1938 by the Duchess of Abercorn. When the school’s third Headmaster Mr Russell was appointed in 1939 a priority of his was to establish rugby in the school, which he did in the early 1940s.

After the Second World War ended in 1945 the United Kingdom was undergoing profound change. For example in 1948 the new National Health Service was established that promised free healthcare regardless of the individual’s financial circumstances. Education was changing too. The 1947 Education Act fuelled a huge rise in the number of pupils attending grammar school. Pupils gained admission after passing a selection test when they were eleven years of age. This had huge consequences for Ballyclare High School and sent the school’s enrolment on an upward spiral that by October 1948 brought the school population to four hundred and one.

The massive growth in numbers of course brought problems with accommodation and so the school had to make do with prefabricated huts and mobile classrooms well into the 1980s. Towards the end of Mr Russell’s tenure in 1966, the school buildings were revised with another expansion that encompassed a new Gymnasium, and a plethora of new rooms for Geography, Chemistry, Biology and Physics.

Expansion in enrolment paralleled huge changes in the opportunities available to pupils at the school. For example from the mid-century onwards, the school developed its own debating society, orchestra, choirs and a much broader range of clubs and societies. Success continued in local and national examinations and a much higher proportion of its pupils went into higher, usually university, education. The 1970s brought victory in the Ulster Schools’ Cup rugby in 1973 and the birth of school light opera which became a regular fixture in the school calendar until more recent productions where musical theatre has become an annual event.

Mr Williams had taken over from Mr Russell as Headmaster in 1966 and after his tragic death from a heart attack a short time later Mr Millar became the new Headmaster in 1971. Mr Millar had a reputation for being firm but fair, bringing a new level of discipline and behaviour.

Following Mr Millar’s retirement in 1990, Mr Robert FitzPatrick, a former history teacher and Vice-Principal of the school assumed the Headship. He was fulsomely involved in coaching hockey and continued to lead by example and develop the community ethos inherent today.

Mr David Knox became Headmaster in 2000. He saw the advent of Specialist School status where school reached further into the community and supported an increasing breadth of extra-curricular provision and academic attainment whilst promoting a ‘can-do’ attitude in both staff and pupils. He has been succeeded by Dr Michelle Rainey who took up office in September 2015. As a former geography teacher, Head of Year, Head of Subject and Vice-Principal she is entrusted to use her experience to lead the school forward through its next chapter, blending the best of the traditional attributes of an Ulster grammar school with new challenges, to ensure Ballyclare High continues to serve its community as it always has. 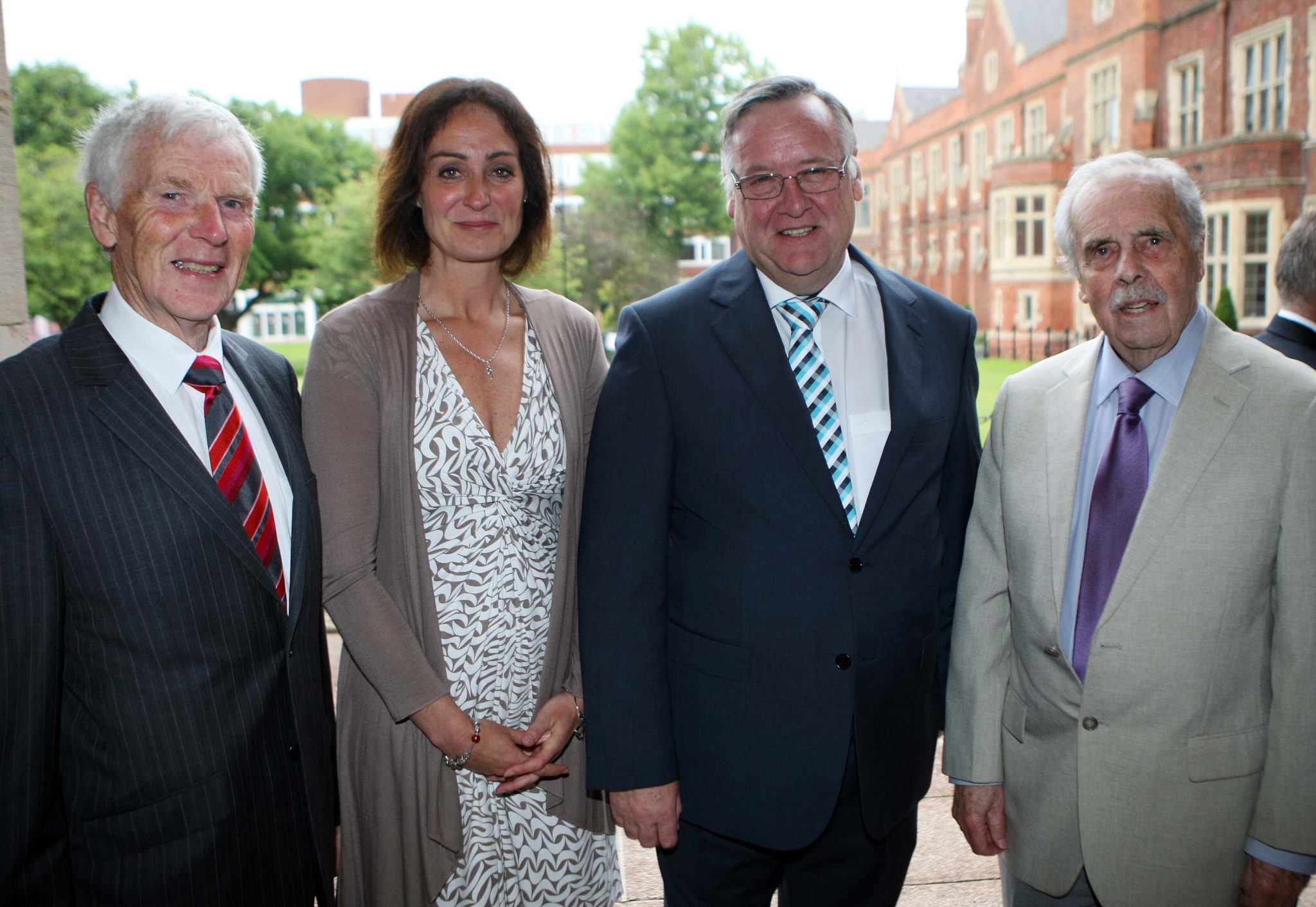 No school stands still and Ballyclare High has changed enormously in the last three decades. The school, which benefited greatly from a £4 million extension that was officially opened in 1987, is now one of the largest grammar schools in County Antrim with over twelve hundred pupils and nearly 80 teaching staff. It has become a leader in the use of Information Technology to enhance the learning experience of its pupils and has won a multitude of national and international awards in this field including a recent endorsement of excellent practice in e-Safety. The school’s dedication to looking beyond its locality is reflected in the fact that it has held the International School Award for 18 years. Investors in People and the Investors in People Health and Well-being Award are other examples of Independent endorsements for exemplary practice. A  full list of such accolades are available in the School prospectus.

“Any parent should know the ‘value added’ of the school and its desire to always give of its best for students. I’ve been in so many schools over nearly 4 years. Few places sacrifice so much for their learners. It is greatly appreciated”