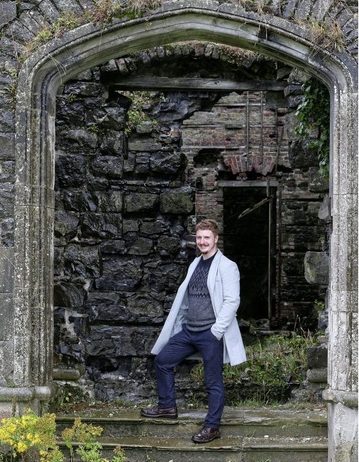 Former pupil Ryan Greer aims to take our local Kilwaughter Castle back to its glory days, we always knew he would make history! The star of many musical shows in school, who can forget his role as Fagan in Oliver and he is continuing to display his creative side with this project.

Kilwaughter Castle has fascinated Ryan since he was a child. “Years later, when I was driving myself, I pulled up to it and had a look. Then I started to research it myself…For the last four or five years it’s been a bit of an obsession.”

A musician, Mr Greer teaches at the International College of Musical Theatre in south Belfast. He also plays in popular Abba tribute band, the Björn Identity, and helps run EastSide Community Choir in east Belfast along with his partner Helenna Howie.

He and Ms Howie, the production manager for the Ulster Orchestra, aim to take over part-ownership of the castle from the current owner Anne Ferguson, who lives in Queensland in Australia.

Ryan will be the first person from Co Antrim to own the building for well over a century. Good luck Ryan and Helenna.